November tends to be the start of the “off” season in Keswick, and the time when guest house owners like us start to think about what they can do to fill their time over the winter. Unfortunately, tedious and sometimes expensive things need doing like redecorating, but it’s a long winter and there’s still plenty of time left for leisure. And when you live in Keswick, it would be daft not to enjoy the wonderful countryside on our doorstep. And looming dominantly over Keswick is Skiddaw (pronounced Skidd-er by locals), England’s fourth highest mountain.

Being newcomers to Keswick last year, we felt that Skiddaw ought to be our first major climb, and so set out on a pleasant day last November hoping for an enjoyable day on the fells. Unfortunately, a pleasant day on the valley floor turned into a rather unpleasant one the higher we climbed. The wind seemed to strengthen with every upward step, and the clouds descended to shroud the entire top of the mountain. By the time we reached the summit, not only were we exhausted from the climb, but were fighting to stay on our feet and couldn’t see a thing. The only sensible thing to do seemed to be head back to town and go for a cow pie and a couple of pints at the George, which is what we did. But it always felt to me like we had unfinished business with Skiddaw (and while I’m at it, Helvellyn and Scafell Pike, which I have also only summitted in cloud!)

And so we tried again last week, on the one day of the week Carol (of BBC breakfast) assured us would have good weather. And so as we walked out of town in the sunshine, we trusted that Carol knew her stuff and that the thin tablecloth lying on top of Skiddaw would clear. When you live in Keswick, it seems only natural to walk the whole way to the summit, although many people drive to the car park behind Latrigg that knocks nearly 1000ft of ascent off the climb. In fact, you end up in the same car park whichever way you go. And so the climbing starts in earnest just past Spooney Green Farm outside Keswick, on a track known to many as the way to the top of Latrigg, the lowest of the fells surrounding Keswick and an excellent viewpoint. Despite being a wide track through pleasant woodland, the path is steep for a short time before opening out onto the western slopes of Latrigg, now more exposed due to recent forestry operations. To get to Skiddaw, you simply ignore the path leading off to the summit of Latrigg and continue until you arrive at the road from Underscar and the aforementioned car park. At this point, although you have walked about 2 miles and climbed around 1000ft, the huge bulk of Skiddaw still looms above, with the wide grey path snaking invitingly up its featureless flank. 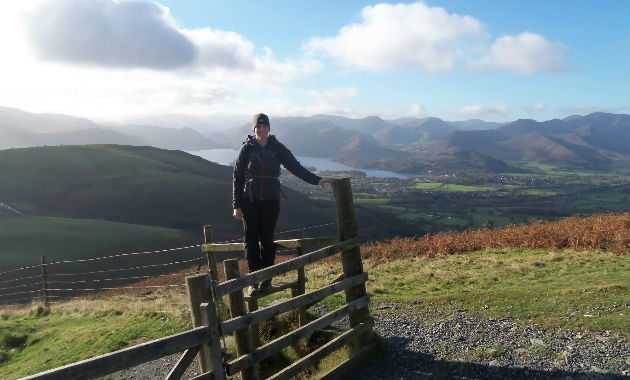 Don’t be fooled by how straightforward this climb appears to be, though. In some respects it is straightforward – there are no crags and no areas of difficulty on the entire route. It is simply a rather dull path up a mountain which’s main (and some would say only) attraction is its height. But that benign looking path is also a real leg-killer, with an unrelenting steepness that seems to go on for ever. By the time the path finally starts to level out, you are well above most of the surrounding fells, Keswick has taken on a toy-town appearance and Derwentwater is stretched out in its entirety before you. Fortunately, respite is provided by the next section, which easily traverses the side of the mountain and gives views over the barren, treeless and little explored area known as Back O’Skiddaw, which is generally hidden from view by Skiddaw and Blencathra. The respite is only temporary, however, as the path soon rises again over rough ground towards the summit. 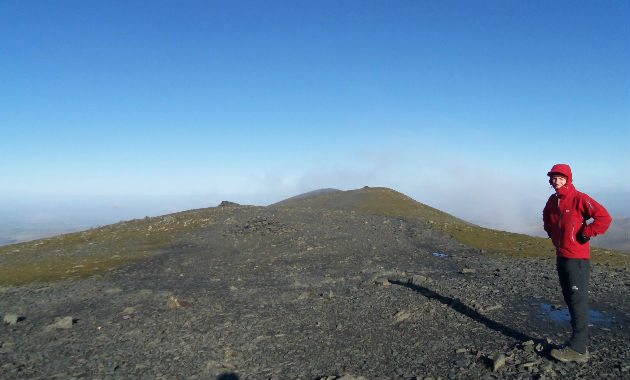 Despite appearing to be a trio of shapely pyramids from Keswick and Borrowdale, it doesn’t take long to realise that this is merely a façade. The mountain is actually a long hump of land running north to south, culminating in a long and fairly narrow summit ridge. Unfortunately for walkers, the highest point is pretty much at the northernmost end of the ridge (i.e. the furthest away!) However, if you like the feeling of being somewhere high, then this is the place to be because the summit of Skiddaw is a genuinely exposed spot. The summit ridge, although not perilously narrow, falls away dramatically on either side, tumbling all the way down to the coastal plain on the western and northern sides. On a clear day, the view extends to the Isle of Man to the west, over the Solway Firth into Scotland to the north and across a jumble of Lakeland peaks to the south. Only the eastern view is blocked somewhat by the bulk of Blencathra. Fortunately for us, the clouds had lifted by the time we reached the top, and the all-round view was clear (although there was too much cloud elsewhere for the full panorama). However, being exposed to the coast means this does tend to be a windy summit, and walkers will tend to be found huddling in the lee of the substantial summit cairn which is actually more of a shelter. 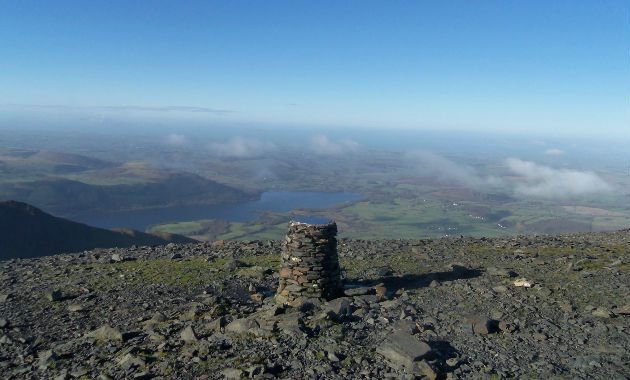 Inevitably the cold started to seep through our clothes after a short while on the summit, and it was time to set off back. Whilst I generally favour a “round trip”, in this case the only way to finish where we started is to follow the same path. This means going back down the same steep path used to come up, and if it doesn’t kill your legs on the way up, it probably will on the way down! Fortunately, it is easy going from the bottom of Skiddaw into Keswick down the Latrigg path, and around an hour and a half after leaving the summit, we arrived back at our front door. No cow pie for us this time, though, just a Cumberland sausage stew at home for tea and then a drink in the town’s newest pub, the Chief Justice of the Common Pleas (yes, that is it’s name). Maybe another pub review is in order….